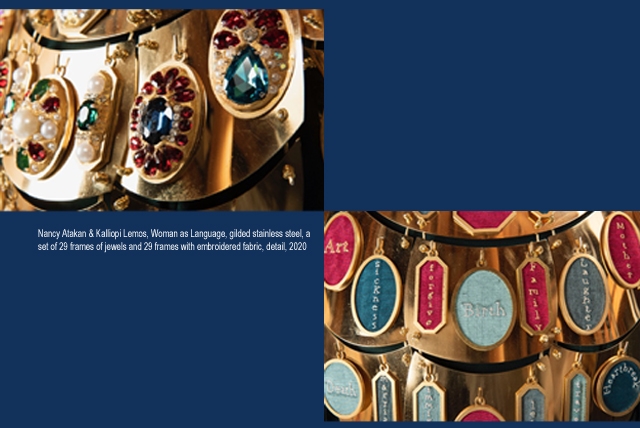 Guided tour: “It still is as it always was”

We return to PI Artworks for another private tour.

This is the first joint exhibition by Nancy Atakan and Kalliopi Lemos; artists who have established considerable international reputations for work rooted in storytelling, identity and the female experience.

The tour will be conducted by Kalliopi Lemos and Gallery manager Roxane Perineau. The session will comprise of a short video together with exploration of exhibits that range from textiles to sculpture.

The genesis of this collaboration came through a shared interest in female and familial stories in which women are often the ‘keepers’ of cherished memories and stories passed down through the generations. Shared memories are a precious inheritance assuming acute importance during the transition from one significant life stage to another; from youth to maturity.

Nancy Atakan, b. 1946, USA. Nancy Atakan is an active figure in the Istanbul arts scene as an artist, teacher, art historian, and art critic since 1969. Often autobiographical, she concentrates on topics such as the relationship between image and word, the meaning of belonging, gender politics, memory, and globalization as they relate to her personally.

All of her work involves research, collaboration and dialogue as it incorporates observations of current events and references to history and culture. Permeated with touches of lightness, historical narratives and weighty issues within her work are brought closer to everyday life.

Some of her most acclaimed projects include the trilogy exhibition Crossings in Eleusis (2006), Istanbul (2007) and in front of the Brandenburg Gate (2009) as a celebration of the fall of the Berlin Wall and the three-part exhibition Navigating in the Dark (2011), Benaki Museum, Athens, Mosque of Ibrahim Khan, Crete and at the Crypt of St. Pancras Church, London.

Lemos is also known for her public art which has frequently focused on subjects including women’s human rights, like her exhibition ‘I Am I Between Worlds and Between Shadows’ in 2013 that was presented in Istanbul as a parallel event of the 13th Istanbul Biennial and was extended until 2015 due to popular demand. Since 2016, her ongoing series of large-scale sculptures in steel, Tools of Endearment have been prominently installed in London and France.

Recent solo exhibitions include: ‘Bound’, ATOPOS, Athens (2019), ‘All is to be Dared’, Gazelli Art House, London (2018), ‘Pledges’ Museum of the History of Migration, Palais de la Porte Dorée, Paris (2017) and also at Château des ducs de Bretagne, Nantes (2017) and ‘In Balance’, Gazelli Art House, London (2016). Lemos’ largescale public work Seven Entrances (14m X 6m) was selected to be included into Eleusis 2021 – European Capital of Culture and will be installed in 2020 permanently in the city, with the aim to be the focus of interaction with the communities of Eleusis. Kalliopi is represented by Gazelli Art House.

The session will end with those of us who wish to do so visiting a nearby coffee shop to discuss the tour.

Please note; it may not be possible to respond during an event or if signal reception is poor.